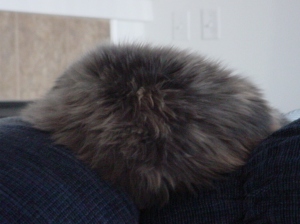 She was born on a farm and didn’t fit in there, then was adopted by a pair of guys in a fraternity. She moved in with them and was named “Brak”, after a space ghost character. As if it wasn’t bad enough she had to live in the fraternity house. Brak even braved a triple tornado to travel home over a school break, once. Then, we all moved in together including two other cats and was that ever interesting – all Brak ever wanted to do was make friends, but there was always a hierarchy. Still, she made the best of it.
Brak had lots of nicknames: Brakwurst, (on sillier days) Brak-a-lak, Brakasaurus, Bracky-Wacky, Frat Cat.. among others.
The pictures above show all sides of her. The first, is the Tribble pose, on her favorite sleeping spot on the sofa. The second is on her daddy’s keyboard tray (the only way to get her off the tray was to let her on his lap), and the third is on top of the much-loved cat tree. She held her own to stay at the top there – and the other two cats always competed. (She knew enough when to give in too!) All she wanted was to be loved and accepted. She was my cuddle-cat too — when I was sad, she was the one who came to see me and cuddle with me. Very affectionate kitty, who didn’t even have a real ‘meow’, just a chopped up attempt that sounded like “kkkkkey”.
Brak’s inspired my vidoe game character (her name’s Braklara and she’s short, with a wide berth, just like kitty). She’s also supposed to appear in some of my writing, details of which haven’t yet been worked out beyond a premise. (1) Braklara the dragon who is stealing knights who come to hunt her so she can force them to worship her – fantasy short story; and (2) Brakasurus Rex, something for kids about a cat that wants to be a dinosaur.
Saying good-bye was difficult, but after being sick for so long, I’m relieved that she’s not suffering anymore.
Bye bye baby Brakus..