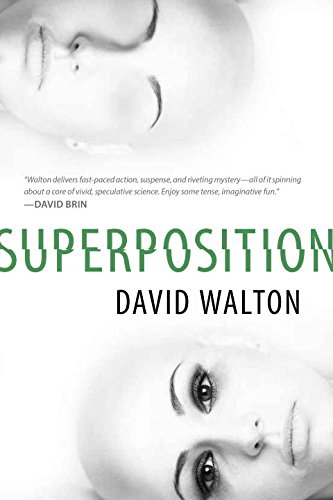 Have you ever regretted a decision you’ve made, or traced a string of unfortunate events back to one innocent choice? Superposition by David Walton is a science fiction mystery that hinges on exactly that.

Jacob Kelly is a family man, having given up the high tech world to teach science to college students. That all changes when he makes the singular decision to have pity on an old friend Brian Vanderhall, whom he invites into his home. This one moment begins a series of events that lands Jacob into a heart wrenching mystery of his murder trial while who knows what has happened to his family.

In a blend of science fiction and mystery, we follow Jacob on a wild ride of physics that has the potential to baffle the normal Joe but Walton builds his characters to present the science in a clear manner that doesn’t make the reader feel uneducated but rather take joy in learning something new, unlike Brian Vanderhall, who is agitated and nervous to the edge of panic when he begs Jacob for help. Brian is the mad scientist of the story, bringing disaster to his own life as well as Jacob’s.

Others are drawn into the chase and legal battle. Front line on Jacob’s team is Terry Sheppard, a defense attorney who wears leather boots in a Philadelphia courtroom. What’s not to like? He’s on Jacob’s side and keeps our hero cool when he gets fired up. Jacob’s brother-in-law, Marek Svoboda, accompanies Jacob on his adventures inside the New Jersey Super Collider where science turns nightmare. A former co-worker, Jean Massey, volunteers to be a subject matter expert despite the person effects on her marriage. Jacob’s daughter Alex shows us a side of our hero that the parented among us can sympathize with. Alex is smart, spunky, and endearing. She’s also coping with her own failings in this story.

Both Jacob and Alex have to deal with reality distorting effects of Brian’s work. They question their worth while worrying about the ends of their own existence, while trying to solve the mystery. Alex is the silent hero of the story for me, noticing the things she does, fighting for something bigger than herself.

I thoroughly enjoyed this book on so many levels. First, the combination of science fiction and mystery. This isn’t merely a mystery taking place in a science fiction book. It’s a mystery that builds on and is deepened by the science fiction. The book takes place in our near future, near enough that the transition is easy to believe, but that the story couldn’t exist without the new technology, or without the madness Brian wrought. I love that Jacob, who is as smart as Brian, is struggling with parenting issues alongside his own grief. He’s not perfect, but his heart is in the right place. It makes him real, and it makes me root for him despite wondering at times if he might be guilty after all. I love the ending, I loved that I had questions about a particular involved person, but didn’t quite put it together until just before the big reveal.

There are scenes I wanted to cite, exchanges between Jacob and Alex, but those would spoil far too much. One of the points I enjoyed, is that the children in the story weren’t perfect; Jacob’s son Sean had a physical disability (which wasn’t treated as a disability in their lives), and that Jean’s child was a special needs child. Details that come up and form the strength and resolve of these characters, parent and child alike, it opens windows into their existences.

I’ll be honest with you: when I get moving on a story, I give up sleep and stay up late to read. I was so riveted in this book, I sent the kids to play in their rooms. We had take-out for dinner. And who needs clean laundry on a Saturday?

Superposition was my first David Walton read. It won’t be the last. As far as this novel goes, if you like science fiction in our own world, if you like a good mystery, then I expect you’ll enjoy it. I do recommend you send the kids to play, and cancel your plans for a day or two. Once you start reading, this book is damned hard to put down.

This entry was posted in Writing. Bookmark the permalink.

One response to “Review: Superposition by David Walton”