I’m stoked to introduce you to Beth Cato, a gal who loves two of my favorite things, baking and writing, I’ve worked with her on Waylines Magazine and have enjoyed many of her short stories. She’s got a novel coming out that I cannot wait to read.

Please read our mini Q&A below, and then check out a note from Beth about Clockwork Dagger.

Dawn: Have you ever combined your passions, for example, writing about baking, or thrown your baking knowledge into one of your characters? (I suppose it would be rather difficult baking about writing…)

Beth: Yes! I had a story in Beneath Ceaseless Skies last year called “Stitched Wings,” where sugar-crusted little cakes play a pivotal role in the plot. Baking works its way into my books, too. I use different types of bread and ingredients to establish different cultures–I refer to things like Mendalian flatbread, or that the country to the north, Frengia, often uses maple in its baking. I even include my food blog’s name, Bready or Not, in a cameo in my sequel novel.

Dawn: (You had me at “sequel”.) Does baking ever help your writing process?

Beth: I get very restless if I’m at the computer for too long. Baking gives me something physical to do and some space to think as well. I’ve worked out a number of plot problems while scooping cookie dough or kneading bread! Plus, if I need a little break while I’m at the computer, there’s always Pinterest… though that can be a dangerous rabbit hole.

Dawn: Eating goes farther in my writing process than baking does. I may need to come visit the next time you’re baking through an issue. Should we expect any food scenes in Clockwork Dagger?

Beth: Oh yes. The food in the book isn’t extravagant; most of the action takes place in a country beset by fifty years of almost constant warfare. In a place that’s known shortages and starvation, my character know they can’t take things for granted. I work in a lot of period research from the American Civil War and World War I, too–things like camp beans, food poisoning, or the sad fact that after war, many work horses were re-purposed for food. That really happened after World War I. But there are positive elements to food as well. My heroine, Octavia, often professes her delight for chocolate. The little gremlin Leaf adores hard cheese–another great love of mine!

Here’s a note from Beth:

My debut novel, THE CLOCKWORK DAGGER, comes out September 16th from Harper Voyager. It’s a steampunk novel with airships, espionage, and a world tree that seriously plays favorites. Here’s the back cover summary:

Orphaned as a child, Octavia Leander was doomed to grow up on the streets until Miss Percival saved her and taught her to become a medician. Gifted with incredible powers, the young healer is about to embark on her first mission, visiting suffering cities in the far reaches of the war-scarred realm. But the airship on which she is traveling is plagued by a series of strange and disturbing occurrences, including murder, and Octavia herself is threatened.

Suddenly, she is caught up in a flurry of intrigue: the dashingly attractive steward may be one of the infamous Clockwork Daggers—the Queen’s spies and assassins—and her cabin-mate harbors disturbing secrets. But the danger is only beginning, for Octavia discovers that the deadly conspiracy aboard the airship may reach the crown itself.

You can also read the full first chapter over at TOR.com.  It can be found at  Goodreads, and purchased at Amazon or Barnes & Noble. or most any independent bookstore.

I’m an author, but I’m also somewhat infamous for my baking. Every Wednesday over at www.bethcato.com, I post a new recipe in my Bready or Not series.

This recipe makes chewy, spicy pillows. They are the perfect cookie for autumn leading right into Christmas. They smell divine, and the taste is just as amazing. 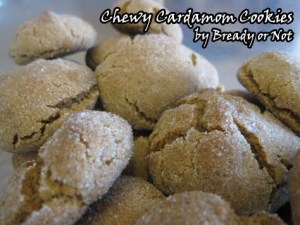 1) Preheat oven to 375 degrees. In a mixing bowl, blend the butter and shortening until creamy. Add in the brown sugar, baking soda, cardamom, and cinnamon.

2) Add the molasses and egg, and once that’s combined, slowly mix in the flour.

3) Using a teaspoon scoop or spoon, shape dough into small balls and roll in the cardamom and sugar.

4) Bake cookies for about 10 minutes or until edges are set and tops are slightly cracked. They will be pillowy–if too much so, flatten the next batch with a spatula or glass, if you wish.

Thanks for the recipe, Beth! Not sure where to go first, the bookstore or the grocery store…

This entry was posted in Writing. Bookmark the permalink.

6 responses to “Clockwork Daggers and Cookies with Beth Cato”